Dual monitors and their advantages 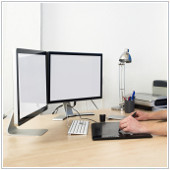 Certain things should always come in pairs: shoes, glasses and computer monitors. While many would agree on the first two, the third not so much. The idea of working with two monitors strikes many as unconventional. Though sticking to familiar territory feels safe, safety isn’t enough to run a successful business. Not ready for the dual monitor journey? These six reasons might help change your mind:

Published studies conclude that by working with dual monitors, overall productivity increases by 20-50%. Computer programmers, for example, can use one screen for source coding and the other for programming; by using dual monitors, they no longer need to toggle back and forth between tabs. This reduces error and frees up time to complete more projects.

This reason resonates with jobs that call for creating newsletters or PowerPoint presentations. Dual monitors would eliminate the need for alternating between tabs and scrolling up and down as you work. Also, the enhanced visibility reduces chances of making mistakes and thus losing more time fixing them.

With dual monitors, the days of stacking numerous editing tools on top of the image or video you're working on are long gone. Instead of your screen looking like a game of Mahjong, you can put the editing tools on one screen and leave the image on the other. With better visibility, you’re less likely to commit errors and more likely to be finessed, and you’re not sacrificing valuable working time in the process.

You want to buy a camera, and you have two models in mind. It’s time to make a decision, so you have to compare their specs. If you had only one monitor, you’d need to go back and forth from one tab to another. But if you had two monitors, you could view the models side-by-side to help you clearly see their differences and make an informed purchase.

Working hard means you get to play hard -- what’s better than a gaming session? The answer is a relaxing gaming session on dual monitors! With more screen space, you can see enemies from afar, anticipate their actions, plan your retaliation, and attack!

Dual monitors benefits almost every industry because of the enhanced visibility, larger screen space, and how you can briefly nap behind them without getting caught Using dual monitors can enhance even your leisure time activities as well.

Broaden your horizons by getting in touch with us. We’ll answer any questions you have.

Published with permission from TechAdvisory.org. Source.